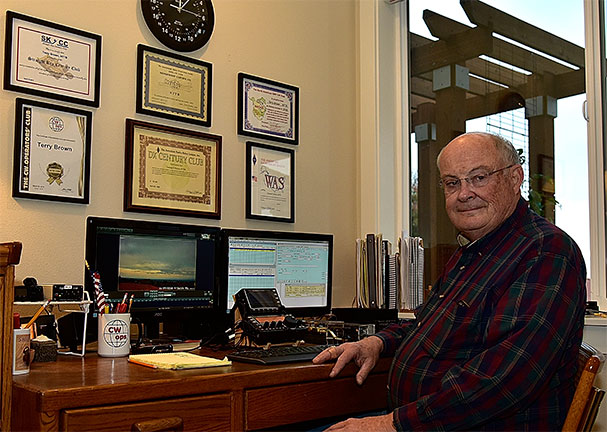 Terry in his Salem, Oregon Shack

My name is Terry Brown.  I became a ham in 1981 when I passed my Novice class license.  Later that year, in September, I went to the FCC field office in Portland, OR where I had to take the technical exam and code (13 wpm) exam where my copy was checked and I was allowed only a few errors.  I passed.  I then anxiously awaited the arrival of my General class license from the FCC.  After waiting 5 months with no ticket, I contacted Oregon Senator Mark Hatfield’s office in mid February, 1982.  Within two weeks I had my General class license.  It was not what I had expected.  The call was WT7AAG.

I later learned that it was a temporary call sign.  In fact, it was the seventh temporary call ever issued in the 7 call area.  Talk about a rare call.  I was oblivious of how rare it was when I got my ticket in the mail.

The day it arrived was the first day of the ARRL SSB International DX contest.  My first ever ham contact was in that contest.  I had no idea how to work a frequency.  I did hunt and pounce.  Every time I would give my call, I would have the DX station come back to me and ask where I was from?

If I had had just a week of operating, I would have had the confidence to work a frequency, and with that call, probably achieve DXCC in that one contest, instead of it taking 11 years.

About two weeks later, I received my permanent call, N7DVA.   Even though I was a veteran, I never really liked that call because it reminded me of the “Oregon Department of Veterans Affairs.”  I kept this call until I passed my Extra class license.  There were no one by two callsigns left in the 7 call area, so I asked for a custom call and received it; N7TB for my initials.

To achieve the Extra class license, I had to pass the 20 wpm code test.  At that time it was a fill in the blank test.  I was frantically writing down what I could and passed the exam with maximum errors.  I had never had any interest in CW so after passing the exam, I returned to SSB operations.  I worked SSB for 25 years until it got stale for me.  I then went QRT for 7 years.

After the QRT period, I decided to come back and focus on CW exclusively.  It took me three years of work, with the help of four CW friends, to get my CW speed from about 10 wpm when I started again 3 years ago, to today being able to send and copy in my head at 25 to 30 wpm and in contests closer to 40.  I began this process when I was 67 years old.